A lot of efforts in the last half year are coming to fruition … release time! You can now use DeltaChat not only on Android but also on Desktop and iOS and chats are usually synchronized quickly in common multi-device settings. Nothing ever quite works perfect but it’s working well for many who used the incremental releases the last weeks, including for lots of private communications with friends. We consider our January 2019 releases, even if a significant milestone, only another beginning for more fun and interesting things to evolve …

Delta/Android 0.100.0: code was entirely revamped and we just triggered an F-droid release and soon (tm) are aiming for G-play as well. The new Android code is based on Signal’s UI code instead of the Telegram UI code used for the previous 0.20 F-droid release. By this bold half-rewrite, 20-30 long-standing issues could be closed and we have a much nicer and more maintainable code base now – yay!

Note that we also worked hard to bring back the UX look and feel of the Telegram version and there are still some things left to be done. Tons of thanks to Bjoern Petersen, Angelo Fuchs, Daniel Boehrsi, Florian Haar, Asiel Díaz Benítez, chklump, amplifier, testbird and many others who contributed code and bug reports on a continous basis!

If you have installed and used Android dev releases (thanks!) you will need to run an export/import cycle if you install the F-Droid app or a new dev apk release. Current F-droid users will just be upgraded and don’t need to export/import. Once Delta/Android actually appears on F-droid (may take a while) we’ll see to do another blog post describing more of what’s new. 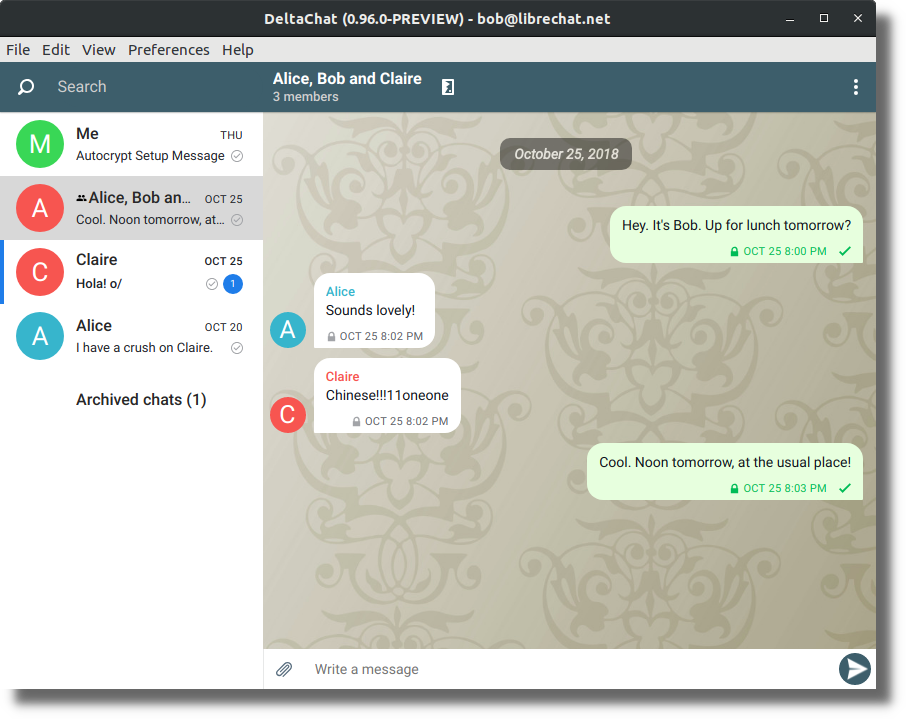 Delta/Desktop 0.99.0: the brand-new Desktop app with pre-built packages for Linux and Mac (help for Windows needed!). The Delta/Desktop effort has evolved over 6 months now and is working nicely for many already. It re-uses parts of the Signal/Desktop application but again we worked hard on the UX side to get more of a Delta/Android and Telegram UX feel. Big kudos to Magnus/ralphtheninja, Karissa McKelvey, Jikstra, Simon Laux and several others who helped to make Delta/Desktop a reality.

You can use Delta/Desktop standalone, i.e. without a mobile, or in conjunction with a mobile app. Chat messages and encryption can be shared between Delta apps using the same e-mail account. Desktop offers multi-account support which all other platforms don’t offer yet.

Many thanks to Jonas and Alla Reinsch, Friedel Ziegelmayer, humanlikedesaster and the hundreds of folks who tried out earlier TestFlight releases.

Help on iOS development is very welcome. Current development is moving slowly but you will get quick feedback if you try to fix or improve things. Please checkout the github repository to report bugs or contribute code.

deltachat-core on Debian: Micah Anderson who also advises DeltaChat on several levels, managed to bring deltachat core 0.39.1 into Debian/Unstable. Many thanks to Drebs and Janka for helping this effort along!

new Transifex language repo which is now the new language base for all Delta apps. If you speak non-english please see if you can contribute. Many thanks to Enrico Bella who helped to organize things with translators and also participates as a liason between translators and devs.

When it comes to thanking and mentioning people i’d like to mention a few more specifically:

So thanks everyone and let’s see what other interesting releases and happenings are coming up in 2019 – quite a few i can guess already, but this blog post is already long enough ;)